Why not the Sako Quad?

Beautiful rifle, and a good candidate for folks that can't afford a 1712, but want more than a CZ 455. Did you test the factory barrel? If so, how did it shoot? Have you bedded the action?
"You are never too old to set another goal or to dream a new dream."
- C.S. Lewis
Top

I did not test the factory barrel. I ordered the Lilja barrel at the same time I ordered the rifle. It took 2 days to get the barrel from Lilja and 4 days for the rifle so I put the Lilja on, opened up the barrel channel and called it good. I have not bedded the action, I wanted to do some testing before I started fiddling with it. If it isn't broken why try to fix it until it is haha.

I think this rifle is a great candidate even for people that can afford the 1712. I was actually set on buying a 1712 until I had the opportunity to shoot the Sako. This rifle is just as accurate as any Anschutz I have shot and I really like the single stage trigger. In my opinion it is just as good as the 1710 I was shooting. I know everyone has an affinity for Anschutz triggers but if it can be adjust to the correct weight,is consistently crisp and clean and has no creep does it really matter if it is an Anschutz trigger? I feel the Sako is a little quicker of an action even compared to the Anschutz 2013 3p rifle I shoot for the Winter indoor league. I'm not saying the Sako is superior to the Anschutz (I definitely don't think it is inferior) but it was certainly my preference.

I did want something a little nicer than the CZ 455 but even that rifle is a great shooter. I borrowed a bone stock 6 pound creepy trigger CZ455 American for the last match I went to at Tacoma Sportsmans Club in Puyallup, WA and ended up winning both hunter and standard with it and shot a 49/60. Great little rifle!

I'll try to post pictures of my targets when I get off of work.
Top

Here are some targets that I shot at Turkey distance, 77 meters, using Geco (RWS) target ammo. All of the targets are 5 shot groups off of my porch picnic table. Should be good enough for the game. 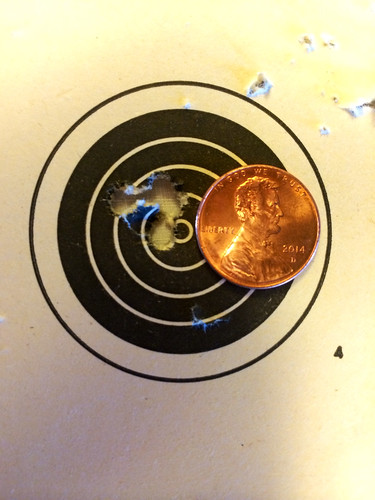 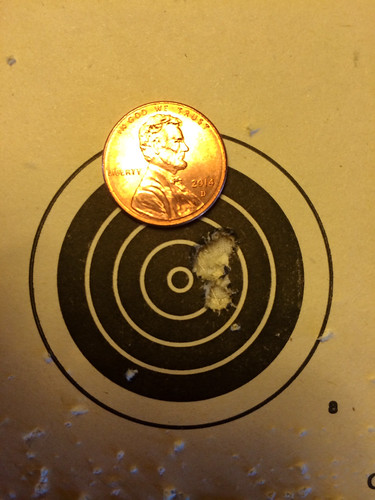 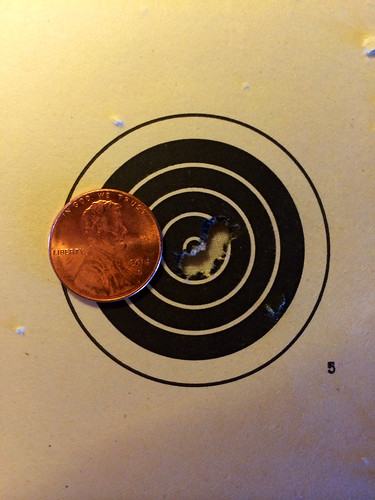 I told you they were crazy accurate, amazing groups off a picinick taaable boo booo!!!

Congratulations on getting a wonderful rifle.
BTW your scope looks awfully low for a head erect silhouette stance gun, is your neck craned over when you look through the scope?
AAA Shooter politically incorrect and loving it
Top

Wow! That is a great looking rifle and really great groups! I have been saving up for a 1712 but now I am thinking about a Sako. How does the Finnfire compare to the Quad?
Top

Yes, very nice groups. One function that is better on my Quad than my 1712 is the extraction and ejection. I've noticed other posts here about extraction and ejection issues with the 1712. The Quad is much better than the 1712 with this function. And FWIW, my Quad will also out group my 1712 over the bench---both have factory barrels. And I like the bolt throw on my Quad better than my 1712. The Quad really does have a lot of positive attributes.
Top

Kevinbear, I have tried the high rings and I found that I prefer my head being close to the axis of the bore. I know as I get older my head will probably get higher and higher but for now the low rings work for me. I even have the Anschutz 3P rifle I use for indoor set up for a low head position. I found my scores going from 95-100/100 to 85-87/100 with a high head position. I know there are lots of studies out there where an erect head position helps with balance but I have tried a high head position and still find myself going back, it just feels most natural to me. I haven’t given up on it totally but for now low seems to be the most comfortable.

DavidABQ, The Finnfire is why I started looking at Sako. I had the opportunity to try a Finnfire at a match and it was stellar. I looked and looked for one to buy but they are few and far between. Every once in a while I’ll see one on gun broker. Then I got to thinking, if it is this hard to get the gun, how hard or expensive will parts be for it. So luckily I had a friend who had a quad in a synthetic stock and he let me borrow it for a few weeks and it was wicked accurate. Some people will say the Quad is inferior to the Finnfire and it was something I was really concerned about but from my experience the Quad is a quality rifle and is definitely equal to the Finnfire. Yes they have a different barrel plug and play system but I am thoroughly impressed with the Quad. DIP has some great accessories for the Quads as well. I would suggest the 25moa rail for sure.
Top

Something else I forgot to mention about my Quad. Even with the Lilja barrel and scope it comes in at 7lbs 6oz. Still room for a bit more weight.
Top
Post Reply
24 posts